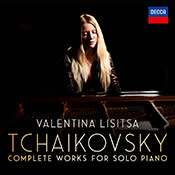 Ask the average music lover what they know of Tchaikovsky’s music and the answer is likely to be the big works, such as the symphonies, the popular concertos, the operas (at least two of them) and ballets. This gives a sadly one-sided view of a much more complex composer. There is also a private Tchaikovsky, who can be found in his deeply felt choral music and many songs, together with enough solo piano music to keep a listener absorbed for months on end. Several pianists have recorded what purports to be the complete solo piano music, but what they included has varied. This new set by Valentina Lisitsa is the completist of complete. It runs to 10 discs, or over 11 hours of music, and comes with the boast of a clutch of rarities getting their first recordings. The beauty of Tchaikovsky’s piano music comes not in the large-scale works, like the Grand Sonata, but the many collections of smaller pieces. The best-known of these is The Seasons, played here with impressive precision, if a touch short on colour. Beyond that, there is the delightful Children’s Album, 30 simple pieces modelled on Schumann; a selection of little-known, four-hand arrangements of Russian folk songs; and a further five discs’ worth of wide-ranging miniatures, many described simply as “morceaux”, which add up to a voyage of discovery. Lisitsa’s playing bristles with technical brilliance, a touch relentlessly so in the bigger works. Among the pieces getting major label first recordings, she is touching in the beguiling Anastasie-Valse, the composer’s earliest piano work, and makes true piano showpieces out of his transcriptions of The Nutcracker ballet and 1812 Overture. A useful one-stop survey. ★★★★☆ ‘Complete Works for Solo Piano’ is released by Decca